Origin and distribution: The Iringa Red zebu falls under the group of Small East-African Zebu of Tanzania (Tanganyika zebu) and is confined to the Singida and Iringa highland regions of Tanzania [CS 1.11 by Gwakisa]. The Small East African Zebus are believed to have descended from the recent introductions of zebu into Africa from Asia, and some may have ancestral linkages with cattle of the Large East African Zebu group. The breeds or strains that belong to Tanganyika Zebu have broad genetic and phenotypic diversity, and are dispersed throughout mainland Tanzania, but mainly in the Dodomo area of central Tanzania. They are named after tribal groups or locations. The Iringa Red was created by a tribal chief who insisted that his people should only keep red-coloured cattle (Rege and Tawah, 1999).

Physical characteristics: They are more or less deep red in colour. All the cattle in Iringa, Uhehe and Njombe were of a uniform blood-red colour, and recent importations of other cattle from Ugogo have led to admixtures of the dominant red coat. They are large-framed animals (Epstein 1971).

Peculiarity: Nearly all cattle are more or less deep red in colour (Epstein 1971).They inhabit cold bleak uplands of the southern area and have proven to survive long hard months of the dry season. They are found in areas where East Coast Fever is endemic of and the breed may be genetically tolerant to the disease.

Breed status: Iringa Red breed is at the verge of extinction (DAD-IS 2005). Rege (1999) categorised this breed as endangered because of interbreeding with Ugogo Grey cattle. Efforts have to be made to conserve the breed.

Utility: They are kept for milk and meat. Performance records are not available. 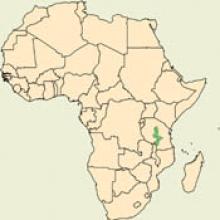 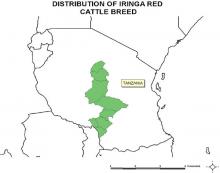