Origin and distribution: Bonsmara is a composite breed developed in the Transvaal Province of South Africa by Professor Bonsma at the Mara Research Station since 1936. The name of the breed was derived from Bonsma's name. The breed was obtained as a result of mating between local Afrikaner cows and European Shorthorn and Hereford bulls, the final composition being approximately 5/8 Afrikaner, 3/16 Shorthorn and 3/16 Hereford. The breed was recognized in 1964, and its breed improvement program has been operating since then. The breed was registered in 1972. The Bonsmara were subsequently exported to Botswana and spread to the north of South Africa where they became well established. Today Bonsmara is not unique to South Africa, but is also found in Zimbabwe, Namibia, Zambia, Swaziland, Botswana, Angola, Mozambique, Rwanda, Australia, Argentina, Paraguay, DR Congo, Brazil, Argentina and the USA where its value under similar conditions is appreciated.

Physical characteristics: The breed has a uniform red and brown coat, medium horn, a slight cervico-thoracic hump in the bull and a good beef conformation. Average height at withers in adult males is 123 cm.

Peculiarity: Bonsmaras are bred and selected through a system that effectively promotes cow efficiency. The excellent mothering ability under all environmental conditions is the reason for their popularity. Bonsmara cows wean calves that are very suitable for finishing off on pasture or in feedlots and have excellent meat qualities. They are well adapted to warm bushveld and subtropical areas. They are also reported to be tick tolerant. It is clear therefore that Bonsmara meets the needs of commercial meat producers as well as stud breeders.

Breed status: The need for a South African beef breed that would do well in the subtropical and coastal regions had already been identified after the depression of 1932-1934. This gave rise to development of the Bonsmara, which efficiently combined the adaptability of the Afrikaner and the productivity of Hereford and Shorthorn breeds. The Bonsmara Cattle Breeders' Society of South Africa was founded in 1964 and this made the breed to become the biggest of all beef and dual-purpose breeds in South Africa through a series of research projects undertaken to improve the breed. Today the Bonsmara are found throughout South Africa under all possible grazing and climatic conditions. The number of active breeders rapidly increased from only 37 in 1970 to 339 in 1998. In 1998 in South Africa, reliable census indicated that the population of total breeding females was 95 889, and it was increasing. Cryo-conservation programme has stored 15 194 doses of semen at commercial AI station (DAD-IS 2005).

Utility:Bonsmara breed is used mainly for beef. Under pasture condition the average weight at birth, at weaning and at yearling age of females were 36, 220 and 317 kg, respectively. On the other hand under feedlot condition, the respective weights for males were 39, 240 and 388 kg, respectively (Theron and Scholtz 1994). Average adult live weights for males and females range from 544-950 and from 249-618 kg, respectively (Payne 1970; DAD-IS 2005; DAGRIS 2005). During 1995 a total of 3352 of the best producing cows of all breeds of South Africa were listed, according to the six pre-requisites stipulated by the National Beef Cattle Performance and Progeny Testing Scheme and 62% of them were Bonsmara (Table 1). Age at first parturition is 32 months with a calving interval of 407 days. Average daily gain and dressing percentage were 1583 g and 60%, respectively (DAD-IS 2005).

Research conducted at the Mara Research Station proved that Bonsmara performed better on marginal grazing than the indigenous, dual purpose and British beef breeds. Research, coupled with compulsory performance testing for economic traits as well as physical appearance, is expected to ensure that Bonsmara remain the most dynamic beef breed in South Africa.

Table 1. Breed composition of the best producing cows of all breeds in South Africa in 1995. 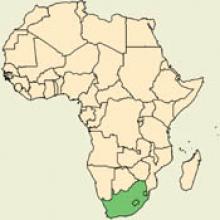 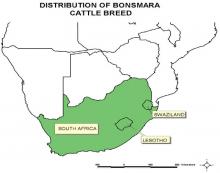