Origin and distribution: The Africander were brought to present-day South Africa by the Khoi-Khoi people during the first century A.D. Their breeding area is throughout South Africa, the main ones being Northeast Cape, Orange Free State, Transvaal and West Natal. The Hottentots owned sanga type cattle, in huge herds, when Dutch established the Cape Colony in 1652. The oxen drew the wagons, which carried Boer farmers and families on the Great Trek of 1835-1836 from the Cape of Good Hope to the Orange Free State, Natal and the Transvaal to escape British rule. The breed was developed from Hottentot cattle in Cape Province and has now become South Africa's most popular indigenous breed (Maule 1990). It has been exported to several countries in southern Africa, including Namibia, Botswana, Swaziland, Zimbabwe, Zambia, Malawi, and Southern parts of D.R. Congo, Australia and USA (Rege and Tawah 1999).

Physical characteristics: The original cattle were gaunt bony creatures. In 1497 Vasco de Gama described them as being very fat, reddish coloured and very wild. They have brown thighs, well-muscled body, and deep broad chest with round ribs. The height at withers for males is about 122 cm (website referred on April 2001: http://dad.fao.org/en/home.html). The colour ranges from dark to light red. Yellow strains were common in earlier ages though they are not so today. The hump (prominent but not large) is cervico-thoracic. The long spreading horns leave the head in a downward and backward direction, then, at maturity, bend gracefully forwards, upwards and backwards. A polled type has also been developed.

Peculiarity: The breed has been bred according to breed standards for many generations and shows a high degree of uniformity in colour and conformation, rarely encountered in other African livestock breeds. It is a heavy beef-type animal and has good meat quality but show lactational anoestrus in times of environmental stress.

Breed status: The breed has been developed into a competitive beef breed and was the first indigenous South African breed to form a breed society in 1912. Nowadays it is probably the most popular indigenous cattle breed in South Africa. Though the population size in 1998 is reported to be 20,465, its cryogenic conservation in semen form and keeping the animals in the different improvement stations in South Africa is expected to ensure that it is not at risk.

Utility: The breed was developed as a draught animal (or Trek-ox) and it is only in the past 40 years or so that its beef potential has been exploited (Maule 1990). It is among the largest breeds in Africa: birth weights of male animals is about 33 kg; adult bulls weigh, on average, 745 kg and adult cows 525 kg; weights of up to 1100 kg have been recorded in show animals (Rege and Tawah 1999). There is considerable variation in the performance of pure Africander cattle, especially in weaning weight and growth rate to slaughter age; but in general they tend to be slow maturing with comparatively low fat cover. The dressing percentage is 54%.

It is not considered to be a milk animal in a country where European dairy breeds supply most of the milk (Maule 1990). The age at first calving is about 36 months and calving interval about 445 days; (website referred on April 2001: http://dad.fao.org/en/home.htm) calving percentages are variable and have been compared unfavourably with other indigenous breeds (e.g. Tswana, Tuli, Angoni, Mashona); however, the cows have been used extensively for commercial crossbreeding, with bulls of European breeds, especially Hereford, Sussex, Devon, Simmental and Charolais (Maule 1990) [CS 1.8 by Mpofu]. For example, it was used with the Shorthorn in developing the Bonsmara breed, and with Holstein in creating the Drakensberger.

Heyns H. and Rautenbach H.F.P. 1985. The relationship between standards of excellence for breed characteristics in Afrikaner cows and the pre-weaning performance of their progeny. South African Journal of Animal Science 15(1):8-10.

Moyo S. 1996. The productivity of indigenous and exotic beef breeds and their crosses at Matopos, Zimbabwe. PhD thesis, Department of Animal and Wildlife Sciences, University of Pretoria, South Africa. 161 pp.

Niekerk A.van Lishman A.W. and Lesch S.F. 1986. The reproductive responses of two breeds of beef cows and the performance of their progeny in two contrasting environments. South African Journal of Animal Science 16(4):209-214.

Setshwaelo L.L. 1987. Breed differences in lifetime performance and longevity of beef cattle in Botswana.Bulletin of Agricultural Research in Botswana 6:38-43. 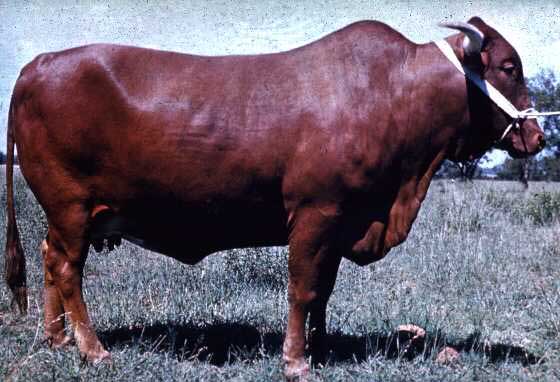 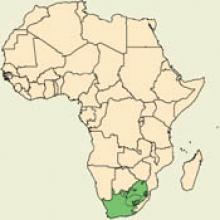 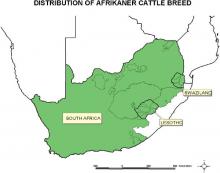